Olivia Kay Foundation was featured in People Magazine’s “People Exclusive” online.  Co-Founders Chad and Lisa Borodychuk had the opportunity to answer questions about the pillow project in a live interview.  You can see the live interview and article here: OKF Featured on People.com .  The article by People.com is as follows:

Lisa and Chad Borodychuk know the power of a pillow.

When the Dewitt, Michigan, couple’s 7-year-old daughter, Olivia, was diagnosed with Alexander disease, a rare and painful disorder of the nervous system, in 2010, she lost all ability to move and function on her own. The loving parents struggled to alleviate Olivia’s joint and back discomfort from the incurable disease, but nothing seemed to work – that is until Lisa placed a hand-sewn pillow underneath her daughter’s back.

“She can’t talk, so she couldn’t communicate to us what was hurting her,” Lisa, 37, tells PEOPLE. “When we propped her body up on the pillow on her hospital bed though, her eyes twinkled.”

Lisa, recognizing the comfort it brought to Olivia, decided to sew pillows for other children on Sparrow Health System‘s pediatric ICU floor.

Lisa and Chad have since sewn and hand-delivered over 1,000 colorful pillows, which they craft with the help of volunteers, to 12 hospitals across the state – and the family is just getting started. 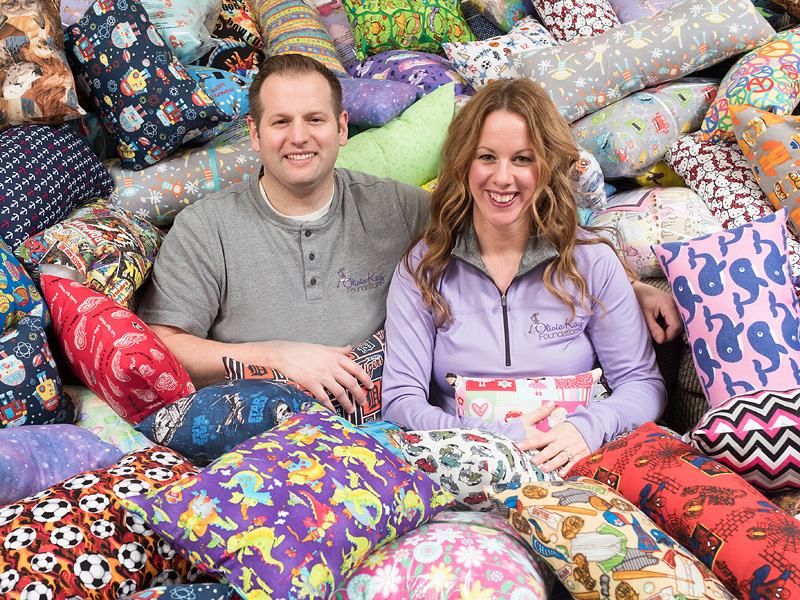 Olivia was born a “healthy little girl,” but at 10 months old she began to lose all of her motor skills and endured frequent seizures. Doctors diagnosed her with the debilitating Alexander disease at the age of 2.

Lisa and Chad were informed there was no cure, and that Olivia would only live to be 7.

“Her symptoms got progressively worse,” Chad, 38, tells PEOPLE. “She lost the ability to smile, speak, move. The hardest part is she can’t let us know if she is unhappy or uncomfortable.”

Olivia can only lie on her side due to her condition, so a comfortable back support became a priority. 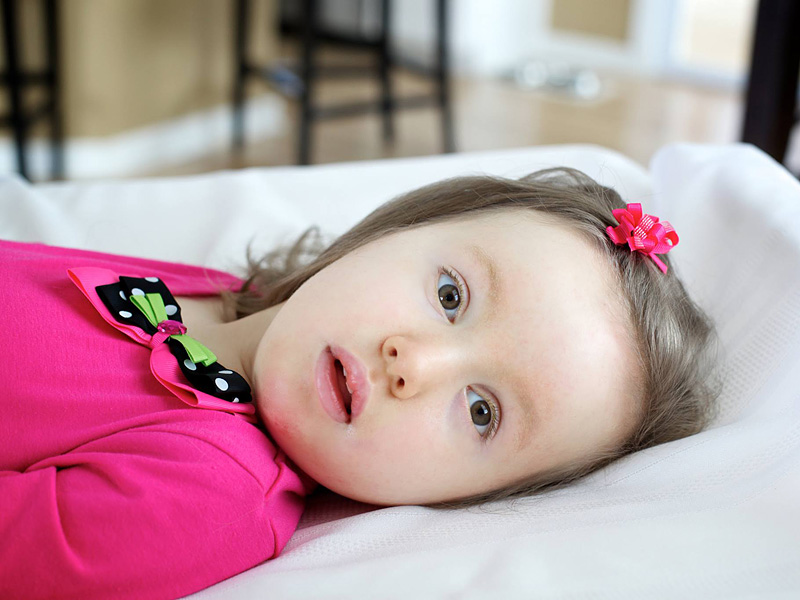 The pillows started off as a hobby for Lisa – she would sew them in fun colors and patterns for Olivia and for kids in neighboring hospital rooms at Sparrow Hospital – but nurses quickly recognized the positive effect the pillows had on patient comfort and morale.

Kelli Kilmon, a pediatric ICU resident nurse at Sparrow Hospital, says the pillows are extremely beneficial for any bed-bound patients who have trouble getting settled into their hospital cots or need material support with their tubing.

“These pillows are smaller and softer than standard size hospital pillows,” Kilmon tells PEOPLE. “We put them between patients’ knees and arms, and use them to prop them on their backs. They are really great for chronic cerebral palsy patients, cancer patients and kids with head injuries.” 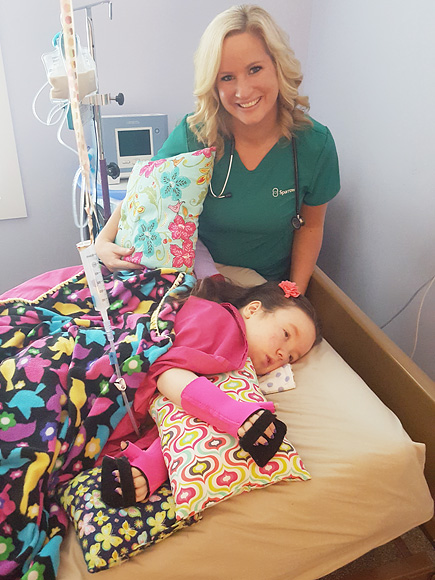 But it’s Lisa and Chad’s variety of pillow patterns (among their most popular are Disney’s Frozen and Michigan sports teams) that gets kids really excited.

“The brightness and color of the pillows brings happiness to an otherwise sterile white room,” says Kilmon. “They let the kids pick out their pillows so it feels personal and they get so excited!”

Miranda Huntoon, a 10-year-old diagnosed with a rare brain malformation, received a dark purple, paisley-print pillow from Chad and Lisa at Sparrow Hospital last year and “still gets a smile” every time she sees it.

“She had gone into a continuous seizure and the only option was to put her in a pentobarbital coma,” Miranda’s mother, Erika Huntoon, tells PEOPLE. “Miranda was laying there with all of these tubes and wires and we were using blankets to prop her up. Lisa called me out to the hallway and handed me a pillow. She said, ‘Maybe this will help.’ ” 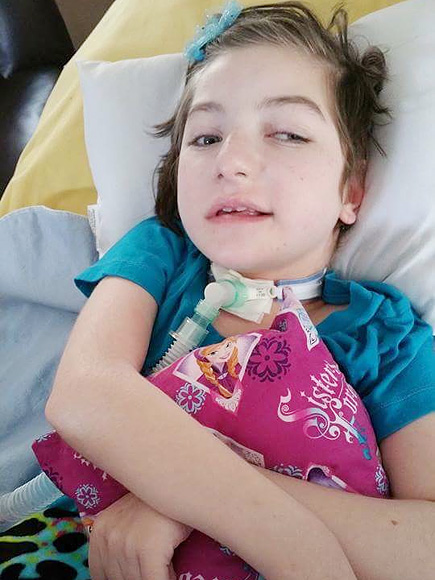 Erika uses the pillow to position her daughter’s legs comfortably.

“It’s like you don’t think that something as simple as a pillow can make the biggest difference, but it absolutely does,” she says. “She loves the colors and someone reaching out to us and helping us meant the world to me.” 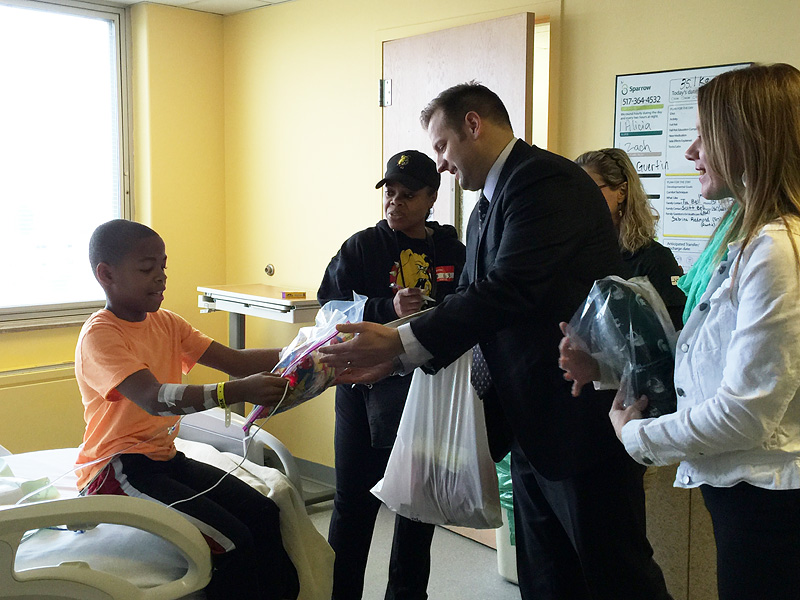 Chad and Lisa gifting a pillow to a pediatric hospital patient

Chad and Lisa started their non-profit organization, Olivia Kay Foundation, in 2014 to find a cure for Alexander Disease and to raise money for pillow fabric and stuffing.

In order to ensure that the pillows are created in a clean and sanitary environment (a necessity for a gift to a sick child), the couple does not accept material donations, only monetary contributions through the Olivia Kay website.

“We are honoring Olivia with our pillow project,” says Chad. “She can’t speak directly to us, but she communicates with her eyes, and we know she’s proud of our mission.” 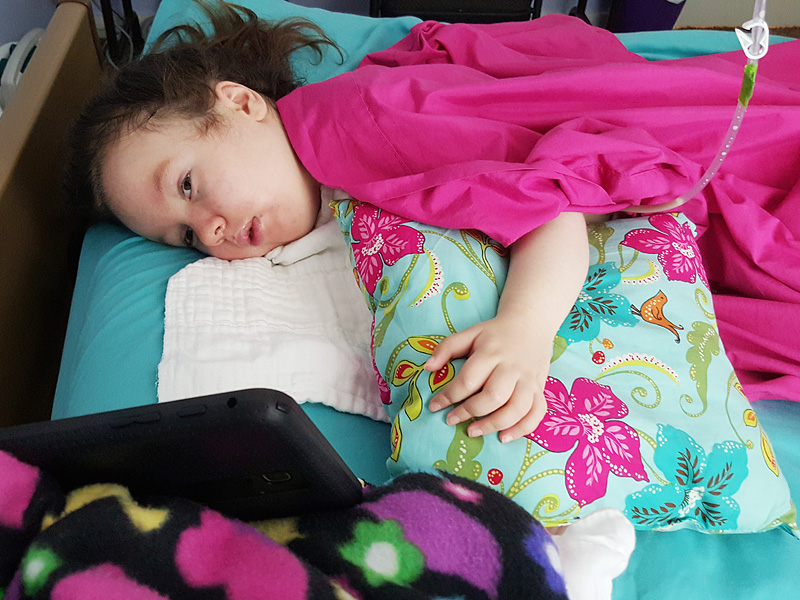 Olivia’s health is in continual decline, but her parents say they celebrate each new day with her “to the fullest.”

“We feel helpless,” says Lisa. “It’s a horrible thing to watch your baby go from smiley and giggly to laying on her side full time – unable to move. So our pillows are our way to give her the best life she can have right now.”

“It’s not hard to tell the surgeries and poking and prodding and blood testing make Olivia uncomfortable, so if the pillows can ease the pain even a little it’s worth it,” adds Chad. “And we hope the they can ease other children’s pain too.”